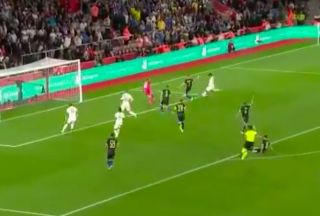 Jadon Sancho has scored twice in quick succession for England in their Euro 2020 qualifier against Kosovo at St Mary’s.

The Borussia Dortmund star scored his first international goal, finishing at the near post after Raheem Sterling’s precise through ball.

Just moments later, the 19-year-old scored his second with a tap in from close range after a brisk England counter.

Sancho has taken the place of United forward Marcus Rashford in Gareth Southgate’s side, who currently lead 5-1 at half-time.

The winger was linked with a move to Old Trafford this summer, but no move materialised with the Reds failing to qualify for Champions League football.

United fans would love to see Sancho at the club; he is one of the most talented young prospects across Europe and would fit perfectly in the right-wing position in Ole Gunnar Solskjaer’s set up.

However, the difficulty will be convincing Sancho to return to Manchester, and Champions League football is essential if Solskjaer is to convince the starlet to make the switch.

Less than three minutes later, he scored his second 🔥 pic.twitter.com/93ZTLX3nUQ