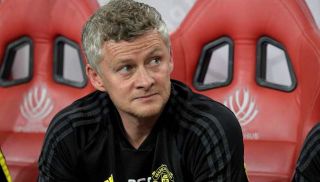 According to the Mirror, Solskjaer is sweating on the fitness levels of Luke Shaw, Paul Pogba, Anthony Martial, Jesse Lingard and Aaron Wan-Bissaka who were all ruled out of international duty with injuries.

Wan-Bissaka and Jesse Lingard had both been initially selected in Gareth Southgate’s England squad for the Euro 2020 qualifiers  against Bulgaria and Kosovo, but had to be withdrawn.

Lingard left the squad due to an illness whereas Wan-Bissaka had to be withdrawn from his first senior call-up because of  a back problem.

It’s crucial Wan-Bissaka returns to the team against Leicester, as Luke Shaw is also likely to still be out after the injury he sustained in the home defeat to Crystal Palace with Ashley Young set to start in his place.

The Times reported last month that Shaw could miss the upcoming  fixtures against Leicester and West Ham.

Meanwhile, Paul Pogba was seen limping after United’s draw against Southampton before the international break.

Anthony Martial is also a doubt after sustaining an injury against Crystal Palace.

However, according to Laurie Whitwell, United reporter at the Athletic, Wan-Bissaka and Pogba have only suffered minor setbacks and are expected to return against Leicester.

We hope Martial is also fit for the tough game against the Foxes, as the Frenchman has looked far more comfortable in the centre forward position than Marcus Rashford this season.