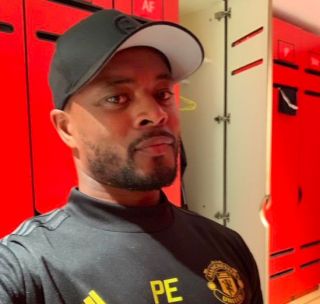 Patrice Evra has started working to complete his coaching badges at Manchester United.

The United great announced his retirement in July at 38 years of age, after playing the final game of his career for West Ham in the 2017/18 season.

“I can’t describe how I feel right now!!!” Evra tweeted.

“Just wearing that training coach kit made me one of the most happy man thank you @manchesterunited for helping me to complete my coach badges!!!

He also made 81 appearances for his national side, but is now ready to begin a career in coaching.

Evra is an eccentric personality and has now become known across the football world fo this bizarre social media posts.

It will be interesting to see the role the former left-back takes after he completes his coaching badges; perhaps he could return to Old Trafford as a coach one day.

I can’t describe how I feel right now! ! Just wearing the coach kit made me one of the most happiest man. Thanks @ManUtd for helping me complete my coach badges. Day done… done! #ilovethisgame #mufc #positive4evra #family #love pic.twitter.com/nb7zvR4fVX