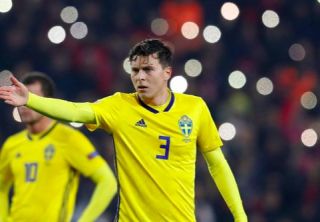 Manchester United defender Victor Lindelof has provided a brutal assessment of his performance on international duty for Sweden.

Lindelof criticised his own efforts in his side’s 1-1 draw in the Scandinavian derby against Norway on Sunday.

“I think I played a horrible game,” Lindelof told Swedish and Norwegian reporters, as quoted by Manchester Evening News.

“I have high standards. I think I just had two passes forward. I should have controlled the game more but I didn’t.”

It’s worrying to see the the 25-year-old hammer his own performances, after making a couple of costly mistakes already for United so far this season.

Lindelof is forming a promising centre-back pairing with new signing Harry Maguire under Ole Gunnar Solskjaer, but was beaten too easy in the air which lead to goals conceded against Southampton and Crystal Palace.

If the Swede’s form does not improve in the coming weeks, Solskjaer should give the opportunity to young defender Axel Tuanzebe to partner Maguire. Tuanzebe impressed in pre-season and is eagerly anticipating his first-team opportunity.

Lindelof did however score with an instinctive finish in Sweden’s other qualifier against Faroe Islands last week.

Get tickets to any Euro 2020 Match for low prices link in bio! pic.twitter.com/bKF8AWaHi7