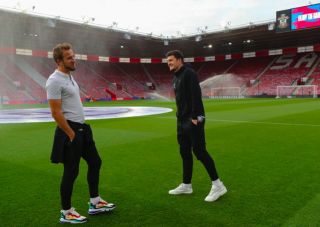 Gareth Southgate has named his starting eleven for tonight’s Euro 2020 qualifier against Kosovo at St Mary’s.

Manchester United’s Harry Maguire retains his place in the side after keeping a clean sheet in the Three Lions’ comfortable victory over Bulgaria at Wembley on Saturday.

He partners former United academy product Michael Keane in a back four including Trent Alexander-Arnold and Ben Chilwell.

NEXT:Win a pair of Carabao Cup tickets to Manchester United vs Rochdale

Meanwhile, Marcus Rashford has dropped to the bench, despite impressing in the second-half against Bulgaria, in which he won a penalty that Harry Kane converted.

The 21-year-old has underperformed in recent games for the Reds and it’s not a surprise to see reported United target Jadon Sancho replace him, after his fine start to the season at Borussia Dortmund.

See the full England line-up below:

Your #ThreeLions team for tonight's game against Kosovo at @SouthamptonFC. pic.twitter.com/HkwWRogAOj