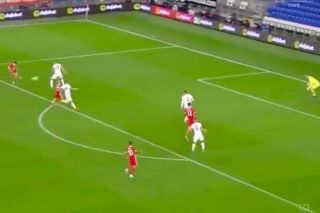 Daniel James has opened the scoring for Wales in tonight’s friendly against Belarus at the Cardiff City Stadium.

The winger is sky-high with confidence at the moment, and took just seventeen minutes to get on the scoresheet for Ryan Giggs’ side.

Following a brisk counter-attack, James was played through on the left channel by Jonathan Williams, before cutting in and curling an unstoppable effort beyond the reach of the Belarus goalkeeper.

The 21-year-old just seems to be getting better and better, and was the brightest player on the pitch for Wales on Friday night when they laboured to a 2-1 victory over Azerbaijan.

James won United’s August player of the month award after goals against Chelsea, Crystal Palace and Southampton, and has continued his fine on international duty.

See the youngster’s great finish below: