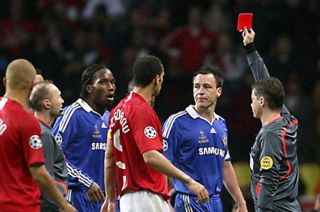 Nemanja Vidic tells The Athletic about the Champions League final in 2008 when Chelsea striker Didier Drogba wanted to fight the Manchester United defender.

He picked one hell of a battle on that night in Moscow, but United were victorious following a penalty shoot-out.

Vidic was never one to shy away when things got heated. He approached Drogba following the initial exchange, though it was the Ivory Coast forward who suffered the consequences by being sent off in the final. The Serb admits both of them were stupid at the time.

Speaking to respected journalist Andy Mitten for The Athletic, Vidic said: “Drogba wanted to punch me during the game. At first I was thinking: ‘What is he doing?’ Then I went towards him. I was stupid, so was he. He was sent off. I saw him again in Moscow 10 years later during the World Cup. We shook hands and said hello. I respect him as a footballer and man. We pushed each other as players.”

Vidic was part of a formidable centre-back partnership at the time, alongside Rio Ferdinand, which put United in a position to boast the best defence in Europe.

It’s a long way off that now but, hopefully with the addition of Harry Maguire, Ole Gunnar Solskjaer can build on something near as good.

With the Serb currently doing his coaching badges we could one day see him back at the club, and he will be keen to share his experiences from facing Chelsea — not just from the European final.

He also spoke to Mitten about finding Chelsea away a particular challenge.

“The pitch is tight and Chelsea had a strong physical presence with Terry, Carvalho, Essien, Lampard and Drogba, who I usually marked.”

He later explained the responsibilities of marking Drogba and the effect a mistake would have on him.

“He’d get a free kick on the edge of the box, which Lampard could then take. If Chelsea scored then it was failure. As soon as I lost the goal then it was a bad day for me.”

You can read the full interview here.