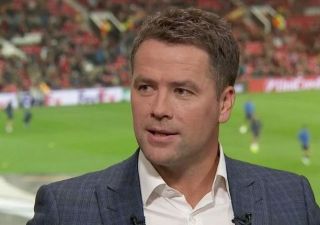 Michael Owen can’t stay out of the headlines at the moment but his latest comments on Manchester United and Liverpool are likely to cause a stir with fans of the latter.

The former England striker has boldly claimed that United’s squad is not too dissimilar to Liverpool — despite the Red Devils finishing 31 points behind their rivals last season.

Let’s not forget Liverpool are winners of the Champions League too, whereas United have dropped into the Europa League. And, if the start of the season tells us anything it should be not to expect a return to Europe’s most prestigious competition anytime soon.

Owen played for both clubs during his career but believes there is little to choose between them.

Speaking to ESPN (quoted by The Express), Owen uttered the view that whilst Liverpool’s recent success has pitched them ahead, he feels United are still recovering from the departure of Sir Alex Ferguson.

“A lot of people will obviously say when you have a manager that is there for that long then it’s very difficult for the next manager just to go and pick up the baton and continue it,” he said.

“But I think not many people would have envisaged the extent let’s say of the decline since.

“There’s been some trophies won along the way obviously which has smoothed things over a little but but in general, when you watch Manchester United now, it is a shadow of the previous teams of Sir Alex Ferguson’s reign I guess, and it’s going to take some building.

“But do Liverpool’s players play with a greater understanding, a great cohesion, a lot of confidence? Then, yes.

“I was talking to John Barnes the other day and he was saying exactly the same thing.

“He doesn’t think there’s anything in the two squads.”

While Liverpool finished second in the Premier League last season, United came sixth and have won just three of their last 17 matches.

It’s no good looking good on paper if you can’t replicate it on the pitch, and I feel that has been the case at United ever since Fergie left.

A number of top players have come and gone leaving fans scratching their heads at their underwhelming spells at the club.

Hopefully Paul Pogba sets the record straight this season and shows everyone his worth. He could make a big difference bridging the gap between us and Liverpool / Man City… if he’s arsed!