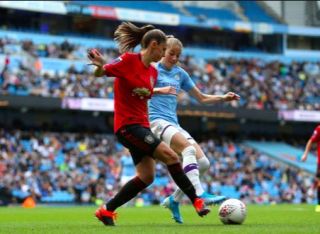 Manchester United are considered holding their first ever women’s match at Old Trafford.

That’s according to a report in the Daily Mail, claiming talks have been held with United officials with discussions at the early stages.

The first women’s Manchester derby proved to be a huge success at the Etihad Stadium with an attendance of more than 31,000, a record for a Women’s Super League game.

The report suggests there are still some concerns amongst United officials about holding a women’s game in the Theatre of Dreams, and it’s unlikely a WSL match will take place there this season.

Given the huge size of United’s stadium, there are worries a sizeable crowd of up to 20,000 would still look the stadium look empty. Arranging a women’s match would also take lots of planning and marketing.

United were the last big side to form a women’s team, but are now in the highest division after their promotion from the Championship in the club’s maiden season.

The club are keen to grow and promote their women’s side, so it would be great to see a game at Old Trafford in the near future, regardless of whether the stadium looks partially empty.