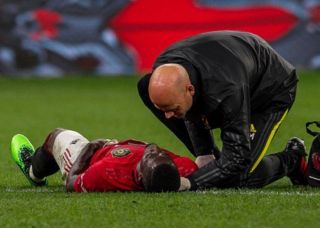 Manchester United have been handed an injury boost with Eric Bailly set to return far earlier than expected.

Bailly was forced to undergo surgery after damaging ligaments in his right-knee during during United’s pre-season victory over Tottenham in July.

It had been expected the Ivorian would not be available for selection by Ole Gunnar Solskjaer until after the new year.

However, as reported by ESPN, initial treatment has been successful and he is making significant strides in his recovery.

The 25-year-old should be back training in the next two months and could be fit to play in November after the international break.

It’s a shame that Bailly’s career at Old Trafford has so far been derailed by injury setbacks; he still has lots to offer when on the pitch as a dominant centre-half, but his trouble remains his fitness.

Despite Harry Maguire and Victor Lindelof building a partnership in central defence, there should still be chances for Bailly to get game time on his return.

With United entering the Europa League competition, Solskjaer will be looking to rotated rest key players, which may give Bailly the chance to partner youngster Axel Tuanzebe at the back.