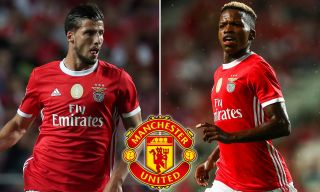 Reports claim Manchester United and Manchester City are set to battle it out for the transfer of Portuguese starlet Florentino Luis.

The 20-year-old is being tipped as the latest big talent coming through in Portugal right now, and this could be the start of an interest trail from the Premier League.

According to the Daily Star, United are among Florentino’s suitors but the youngster has a whopping £91m buy-out clause in his Benfica contract.

Pricey! But they recently got more for Joao Felix, who has really hit the ground running at Atletico Madrid after his summer move, and that could spur other big clubs to keep a close eye on what’s coming through the Portuguese side’s youth system.

The report suggests City are preparing a £55m bid to test Benfica’s resolve.

With United light in midfield, it may be easier for Ole Gunnar Solskjaer to pitch a move to Old Trafford as it would be a lot more difficult for a young midfielder to break into the City midfield.

United lost Ander Herrera on a free in the summer and never replaced him, and there’s Nemanja Matic who has hardly got a look in so far this season.

It is added by the Daily Star that the Red Devils are continuing to scout Benfica defender Ruben Dias.

They could join former Benfica star Victor Lindelof at Old Trafford if Solskjaer decides to prioritise them both on his transfer list in January or next summer.