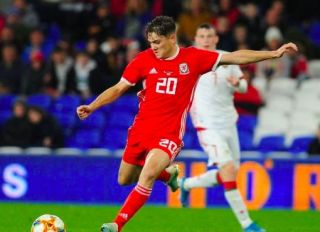 Daniel James continued his fine form by proving to be the difference in Wales’ friendly against Belarus tonight.

The winger scored the only goal of the game, cutting in from the left to curl a wonderful effort into the right corner following a brisk Welsh counter.

James was deservedly rewarded with Manchester United’s August player of the month award, after a fantastic start to life at Old Trafford.

When the youngster joined from Swansea this summer, there were concerns that he was not the calibre of player that Ole Gunnar Solskjaer needed to take United to the next level.

But his start to the season couldn’t have been much better, and his confidence will be undoubtedly high after three goals for the Reds in the opening four games.

NEXT:Former defender tips Wan-Bissaka to be ‘one of the greats’ at Man Utd

Despite an underwhelming start to the season, James has been United’s best player and fans have urged Solskjaer to keep him on the left-wing, where he has looked most effective.

James’ form on the left gives the Norwegian a selection dilemma with Anthony Martial set to return from injury.

Marcus Rashford, who has been underwhelming in recent games, should play from the right if he is in the team, as Martial is far better suited to the central attacking role.

That's Daniel James getting his last three goals from cutting into his right foot to shoot from the left wing. His deliveries from that position have also been topnotch. Would be shocked to see him play in a different position for #MUFC going forward. https://t.co/Khqruz0U1u

If Daniel James can maintain that ability of cutting in from the left to take those curly shots, then our left wing is settled!.

Dan James is our future number 7, as left winger of course.

Dan James has got to be our left winger going forward. Goals he’s scoring from that position at the minute are ridiculous.

Daniel James on the left is lethal. 🔥

Let's see if Solskjaer has the balls to play James on the left wing over Rashford.

Rashford just overthinks things too often. James just plays a simple game. Pass, run or shoot. Rashford doesn't do anything but look up, stop then run into a crowd of defenders. Low IQ?

My biggest fear right now is Ole wanting to accomodate Rashford on left side when James is better there, hopefully he gets ruthless to do the right thing.