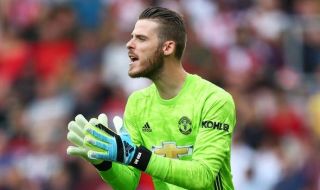 David De Gea is finally closing on signing a new contract at Manchester United, according to a report in the The Guardian.

The Spaniard’s current deal runs out next summer, but it is believed he will pen a new long term deal worth up to £290,000 per week.

NEXT:Gareth Southgate claims Rashford is ‘happiest’ out wide… not at centre-forward

Despite performing poorly towards the end of last season, the goalkeeper remains one of the best in his position in the world, and certainly one of the most important players at the club.

This was evidenced by the fact only he and Paul Pogba from United were nominees for the Fifapro World 11, in which 55 of the world’s best players have been selected.

De Gea signing a new deal would give boss Ole Gunnar Solskjaer one less thing to worry about, so will be welcomed by many Reds.

However, there is a still a concern amongst some that the reports may not be true as we have read endless stories about his future in recent months.

Granted its a bit bizarre that David De Gea gets his bumper new contract when he's in the worst form for 6 years but can you even imagine where Manchester United FC would be without him? Shudder to think tbh. #DaveStays #mufc

I love this game

Its been 715 days since it was first reported that De Gea will be given a new contract and he still hasn't signed. https://t.co/7wGcdsbW7K

The De Gea contract saga is a weird one. Every other day contradicting reports & now he's reportedly close to signing a 290k a week contract. Not really a fan of having a GK highest paid player.

David De Gea who has been United's POTY 4 times out of 6 since Sir Alex Ferguson retired is now "Deadwood" according to some United fans just because he is stalling to sign a contract??? Y'all deserve what's happening at the club.