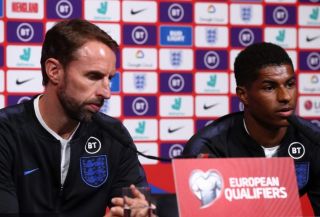 Gareth Southgate has doubts over Marcus Rashford being a centre-forward.

The Manchester United striker has played up front and out wide throughout this season, with the central role very much up for grabs in a toss between the England international and Anthony Martial.

Rashford tends to play out wide on the left when Martial is fit, though criticism is warranted for the lack of goals being scored by the academy graduate.

With Harry Kane banging in the goals each season for Tottenham and England, Rashford is miles off if he thinks he will take that role from the Spurs centre-forward anytime soon.

But that should be the target for Rashford if he wishes to be the central piece to Ole Gunnar Solskjaer’s attack.

However, Southgate believes Rashford is ‘happiest’ when on the wing whilst admitting the 21-year-old is ‘still a work in progress’, as per talkSPORT.

“For a long time we have almost wanted Marcus rot be that option as a no.9,” said the England boss, “but I’m still not certain that is where he is happiest and where he does his best work.

“Marcus is still relatively young. Over the last 12 to 18 months with us he’s had a big impact on our games with a number of goals and assists. So, I think he’s still a work in progress.

“A lot of his development at United was a ‘wide raider’ and I think he isn’t as strong as Harry Kane with his back to goal holding play up.

“If he plays as a no.9, he will play it differently to Harry, but a lot of his best work is on the left coming in off the line.

“I don’t think that’s a problem; we have to be aware that’s probably his profile to get the best out of him, they’re the areas that he needs to get in.”

The lack of goals is a concern for United. We’ve gone into this season — after letting Romelu Lukaku and Alexis Sanchez leave — relying on Rashford and Martial to provide the goods, yet neither has scored 20+ goals a season since breaking into the team.

Solskjaer has a bigger job finding out what works best.