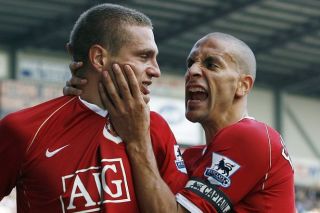 Respected journalist Andy Mitten recently travelled to Milan to interview former Manchester United defender, and the first of a two-part interview has been published on The Athletic.

The United We Stand editor explains how despite being retired almost four-years Vidic keeps in shape and still looks the same.

The Serb didn’t have the easiest of routes to the top of European football and says “I’m fine doing things the hard way” at the beginning of the interview. From playing in Belgrade when his country was getting bombed or going to Russia at a young age, Vidic soon realised the difficulty of playing against top strikers and the importance of impressing teams in Europe’s top five leagues.

United fans dream of having another Vidic. For years our defence has been below par but there’s hope now, with Harry Maguire’s arrival, that the Red Devils can form a force from the back.

It’s always interest to hear about a player’s first experience in the Premier League, but Mitten asked the retired defender about his first encounter against rivals Liverpool.

“My first experience was Peter Crouch,” Vidic said. “I’d never seen a two-metres tall player before. He played for Liverpool and we played them in a cup game at Anfield. I was thinking ‘Wow, what can I do today with this guy?’ Then I saw Bellamy next to him, not a great player on the ball but very, very fast. He would run into space, Crouch would jump into the air. I’d never seen football played like this. I’d never had a No 9 and a sharp, fast, player next to him. I knew how to deal with them individually but not both of them at the same time. I played alongside Wes Brown, it was a tough game, a long game. We lost 1-0.”

Vidic had a number of battles throughout his time at United and for coming through the majority of them on top, he will undoubtedly go down as one of the club’s all-time best defenders.

He’s doing his coaching badges at the moment, so, who knows, we might see him back in a working capacity at some stage.