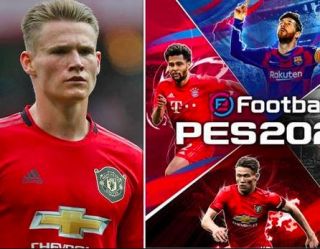 When selecting an elite star to help sell a football video game, Scott McTominay wouldn’t be the first player that comes to mind.

However, PES 2020 makers Konami have chosen the young midfielder to be one of the faces of the next version of the game, which is released on September 10th.

McTominay is alongside Miralem Pjanic of Juventus, Serge Gnabry of Bayern Munich and Lionel Messi on the front cover.

It’s a surprise choice to have McTominay on the cover, given Man United have far more marketable players, such as Anthony Martial and Paul Pogba.

The move has raised eyebrows amongst fans, but Jonas Lygaard of game developers Konami has explained the decision:

Lygaard told Goal: “If we put Lukaku on the cover and he’s now left the club, we would have printed millions of copies of the game and have it on digital stores and sadly it would be a negative thing when it should have been a positive thing.”

“It comes from multiple conversations. We speak to the club for sure, we speak to the player and their representatives to get an indication of what is happening with the player. You don’t get any guarantees with any players.

“Ole Gunnar Solskjaer has been very keen on developing a new Manchester United, with young players coming through and building the team from the ground up.

“We have McTominay as he is a fantastic talent and also has a promising future. Some people see him as the future captain so there were lots of good things about him.”

Manchester United are still a global footballing powerhouse so it’s not too much of a surprise to see a  Red included on the front cover.

McTominay’s selection appears strange, but there is some sense behind the decision as it does not come with the risk that the likes of Pogba may have come with, as he could still potentially leave the club in January.

The Scotsman has established himself as a first-team regular under Solskjaer because of limited options in midfield this season, and he has potential to play for the Reds for a number of years.

McTominay started for Scotland tonight in the Euro 2020 qualifier against Belgium at Hampden.