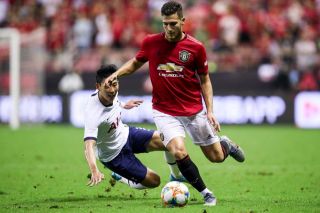 Diogo Dalot has been having treatment at Chinese club Shanghai SIPG with a Brazilian physio known as the Miracle Doctor.

The 20-year-old full-back has not played yet this season and Ole Gunnar Solskjaer said last month that he was out until after the current international break.

With Aaron Wan-Bissaka and Luke Shaw currently ruled out with injuries, it would be a good time for Dalot to be fit as an opportunity for him to stamp his mark on the team. Fans aren’t keen on seeing Ashley Young fill in on either flank but Solskjaer hasn’t got many full-backs to select from.

Solskjaer did not tell us that Dalot was suffering with a hip injury and that he had gone to see Shanghai’s physio Eduardo Santos, which is now being reported by AFP.

It is claimed that Dalot arrived in Shanghai on August 29 and spent 10 days with the Chinese champions, with the club publishing a photo of the defender at their training ground.

Hopefully he returns soon and gets some minutes under his belt. Last season was his first at the club and he showed some promising glimpses in a red shirt but not enough for Solskjaer to hold back on signing a new right-back.

Wan-Bissaka was a needed addition and he has settled like a fish in water.

Santos was dubbed the “Miracle Doctor” by French media in 2015 after getting defender David Luiz — then at Paris Saint-Germain — fit in just days after a serious hamstring injury.

AFP claims Luiz contacted his fellow Brazilian and flew to Russia for treatment when Santos was employed by Zenit St. Petersburg.

He has worked with former United striker Radamel Falcao in recent years.