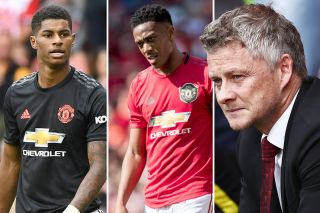 Alan Shearer has been writing his column for The Sun in which he touches on the risk Ole Gunnar Solskjaer is taking by relying on just Marcus Rashford, Anthony Martial and Mason Greenwood for goals all season.

There’s no denying that this has crossed everyone’s mind this season, with United so light up front after offloading Alexis Sanchez and Romelu Lukaku over the summer without a single replacement.

Welsh youngster Daniel James was signed before the attacking duo left, and he wasn’t expected to get off to the start he has with three goals already to his name.

Shearer certainly seems unconvinced by Solskjaer’s options up front with Martial’s scoring record also not the best, Rashford struggling for form and Greenwood still very inexperienced and unproven at this level.

“It is a bigger issue for United because they have taken a huge gamble by not replacing Lukaku,” the former Newcastle striker wrote in his column.

“Going into the season with just Marcus, Martial and Mason Greenwood is very risk and that is a huge burden for those three to carry over a long campaign.”

Whether you like Lukaku or not, he scored goals and will continue to do so with Inter in Serie A.

Sanchez was a disaster signing — arriving in January 2018 — from start to finish, but being rid of him could see another youngster step up to the plate if injuries get in the way throughout the season.