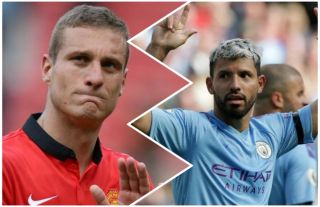 Although it’s not easy giving a Manchester City praise, Sergio Aguero is one of the best strikers in Premier League history.

The Argentine has had his issues with injuries down the years, but he’s always thereabouts when it comes to the top goalscorer charts towards the end of the season. He can turn a game at the blink of an eye and is the main reason for much of City’s success in recent years.

Aguero is a striker former United defender Nemanja Vidic had to deal with during his time at United, so he knows a thing or two about playing against the Argentina international.

In a brilliant interview with Andy Mitten for The Athletic, Vidic gave his verdict on Aguero as a striker.

“Aguero looks like he’s not interested in football on the pitch,” he said. “He doesn’t look like a guy who will run 10 metres and then — bang — he makes the sprint. I’m convinced that Aguero was born as a defender. He knows where the ball will come and where he can attack. But in the box, he has a low centre of gravity, which helps him change direction quickly — especially against the big English defenders. He shoots quickly, he can do the tap in and dribble and score outside the box. I played against him when they beat us 4-1 in the Moyes season.

“That was my worst game for United. I know I’m supposed to choose those two final defeats to Barcelona and they were horrible to lose. That one in Rome, and Wembley was even tougher.”

That explains why so many defenders seem to struggle with Aguero. One minute he looks disinterested, the next he’s behind your defence and in on goal.

Prior to the international break, Aguero appeared to have a bust-up with City manager Pep Guarduiola on the touchline for all cameras to see. A report from The Sun described it as “furious” but that would be over-exaggerating. Still, it doesn’t look very good and should concern City supporters with much of the season to be played.