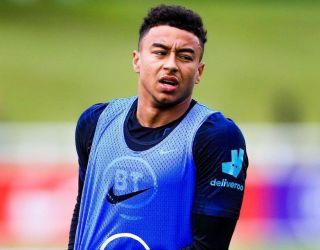 Jesse Lingard has taken to Twitter to express his disappointment at missing the end of international duty due to an illness.

England manager Gareth Southgate hinted that it’s nothing serious, as per Sky Sports, but it remains to be seen whether it rules him out of Manchester United’s Premier League clash with Leicester City, on Saturday.

Despite not contributing to a single goal over the course of eight months for United, both club and country managers continue to start Lingard in games. It would be a shame to see health issues sideline him for any length of time, yet it is time Ole Gunnar Solskjaer made some changes to his starting approach in games.

The 26-year-old has not commented specifically on his illness, but admitted it was ‘frustrating’ to have to leave the England camp, whilst also wishing his team-mates well in their next game.

Frustrating that illness has meant I can’t be involved in these two games. Great result yesterday and sure the lads will get the job done again on Tuesday! pic.twitter.com/gFv2rWI3DG

Lingard also missed out on England’s 4-0 win over Bulgaria. Their next fixture sees the Three Lions take on Kosovo on Tuesday evening.