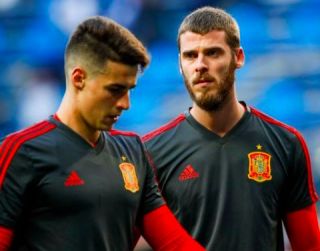 Spain beat Romania, the team placed second just below them in their group on Thursday night, in a game where Roberto Moreno picked his strongest starting eleven.

De Gea, meanwhile, starts tonight in a weaker Spain side that face the Faroe Islands, who have yet to pick up a point in the group.

The United ‘keeper is still undoubtedly a world class shot-stopper, but recent mistakes amid uncertainty around his future have meant he is now behind Chelsea’s goalkeeper in the national side.

The 29-year-old was at fault for Crystal Palace’s winning goal at Old Trafford two weeks ago, letting an effort squeeze past him at the near post.

It’s good to see De Gea get back in the Spanish team, albeit against weak opposition as he looks to build up some confidence after a shaky start to the season at United.

Kepa with his fourth consecutive start for Spain means that he is now officially their new #1 goalkeeper, replacing De Gea 🔵🇪🇸 pic.twitter.com/P3vOSKyU1E