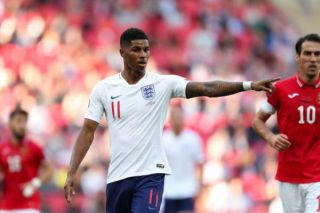 Roll on next weekend…

Good afternoon. Just a quick blog because it’s Sunday and we’re in the middle of another boring international break, so there’s not a lot going on that counts as genuine Manchester United interest. I will quickly scrape the barrel in an attempt top break down what happened on Saturday while our players were away with their countries.

It would be fair to say there are a lot of us who dread the international breaks, but this one especially drives me mad. The domestic season begins and almost immediately it’s took away from us again. For me, an Irishman, I was pleased with the 1-1 draw against Switzerland during the week. They’re a much better side than Mick McCarthy’s men but the boys in green never gave up and were rewarded with a late equaliser by the hard-working David McGoldrick. There seems to be a good feeling about the McCarthy camp after Martin O’Neill and Roy Keane’s spell in charge ended badly, but what a memorable ride it was…

Last night much of the focus was the England game. Harry Maguire and Marcus Rashford played the full 90 minutes as the Three Lions made it three wins from three in their Euro 2020 qualification campaign, by beating Bulgaria 4-0.

The highlight of the night — for the United lads, at least — was Rashford winning a penalty for Gareth Southgate’s side, which Harry Kane converted. He also played a role in England’s third but didn’t manage to get his own name on the scoresheet, although he came close late on when denied by the keeper after a superb one-two with Chelsea midfielder Ross Barkley. Rashford needs to add more goals to his game and Southgate will be eager to see him do just that on Tuesday against Kosovo.

However, a man linked with a summer move to Old Trafford is hoping to make his first senior appearance for England in that game. Leicester City playmaker James Maddison has been a pleasure to watch since he joined the Foxes from Norwich side, making the jump from Championship to Premier League, and he has taken to the top flight like a fish in water. Gary Neville and Jamie Carragher recently went out of their way to praise Maddison, as reported by the Manchester Evening News.

The Mirror grabbed ahold of him whilst away on international duty and asked the Leicester star about his future, amid claims United are interested. Maddison said: “I want to play at the highest level my ability will allow me to.

“I like to think I’ve my head screwed on with the transfers I’ve made. I’ve played League One, in Scotland, the Championship and the Premier League. I worked my way up.”

Maddison may not have name-checked Manchester United, but he’s not ruling out a move to the top six with comments like that. He would be a major improvement on Jesse Lingard who missed England’s win over Bulgaria through illness.

Elsewhere on Saturday, Nemanja Matic was on the losing side in a six-goal thriller when his native Serbia took on Portugal in Group B. The 30-year-old, who has been going out of his way to set objectives for Ole Gunnar Solskjaer, played the full 90 minutes in Belgrade.

I didn’t appreciate Matic’s comments. It sounds like he’s p*ssed off with being pushed down the pecking order at United and doesn’t want the players to take any responsibility for recent results.

All of that aside, Matic was involved in a nice moment following the defeat to Portugal. His sons asked him to help them get a picture with Cristiano Ronaldo, so the United midfielder waited for the Portuguese star outside his dressing room and took the snap himself while his starstruck kids posed with their hero.

You can see the lovely moment in the video below:

I’m relieved that out of the two games yesterday, none of our three players involved suffered injuries but that fear will remain this week before United take on Brendan Rodger’s Leicester side. That’s when we will all get a closer look at Maddison. Hopefully he doesn’t shine too bright — and keeps his best form for when they take on Liverpool, Man City, Spurs, Arsenal, and Chelsea.

Today there are potentially two games to watch out for with a United perspective. Sweden take on Norway in Group F and Victor Lindelof goes into the game after scoring in the 2-0 win over Russia. Spain host Faroe Islands but David de Gea is unlikely to start with Robert Moreno opting for Chelsea stopper Kepa Arrizabalaga in their last four games.

De Gea’s form of late warrants dropping but if he can rediscover his form of old Moreno will have no problem changing his mind. Prior to their qualifier against Faroe Islands, the Spain manager said he does not have a preferred goalkeeper between Kepa, De Gea and Roma’s Pau Lopez.

“I don’t have a starting goalkeeper,” he said at a press conference, as per The Mirror. “It may or may not change.

“I keep the same message. All three are of the top level and I really want them to make my decision difficult.

“The three have trained at a very high level. I will not say if one is my preferred goalkeeper or not.”

Everyone wants De Gea to rediscover his form and sign a new long-term deal at the club, but a quick-fire decision may be made if he doesn’t improve soon. United would rather receive a fee for one of the best goalkeepers in the world than lose him on a free.

Have a good Sunday!