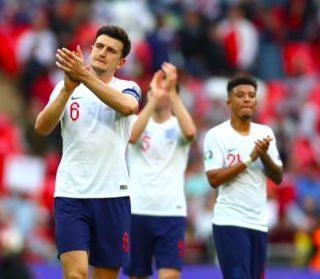 Roy Keane says there are still ‘one or two’ question marks concerning Harry Maguire, despite United’s new signing keeping a clean sheet as England cruised to a 4-0 victory over Bulgaria at Wembley.

The 26-year-old has settled into life well at Old Trafford since his record £80m move from Leicester City this summer.

But Keane is not yet convinced by the centre-back, and points out his lack of speed on the turn as a key concern.

“I think he has done OK,” the United great said, as quoted by the Mirror.

“We’re talking about how good he is on the ball but defensively I still have one or two question marks over him. I worry about his pace on the turn.”

“I remember the first goal against Crystal Palace and he wasn’t doing his best covering his other centre-half. Listen, he’s 26 years of age now. You’re worried if you’re pointing these things out to him.”

Keane was pointing out Maguire being slow off the mark to cover Victor Lindelof in defence for Jordan Ayew’s opener for Palace at Old Trafford.

But the Englishman looks assured when in possession for the Reds and is rarely caught out of position.

Arsenal legend Ian Wright defended Maguire, and believes he will prove he is worth the money the Reds paid for him.

“He’s a very good footballer who has gone up the leagues and he’s got better. Now he has gone to Man United and it’s the pinnacle, really.

“They have paid that money for him because he is worth the money.

“Now we are just going to have to see him flourish at a club like Man United.

Ole Gunnar Solskjaer needed a central defender this summer to partner Victor Lindelof and prioritised Maguire, so clearly has huge faith in him.

Maguire and United teammate Marcus Rashford next face Kosovo in Southampton on Tuesday night in the Euro 2020 qualifiers, before Solskjaer’s side are back in action in the Premier League at home to the defender’s former club Leicester on Saturday.