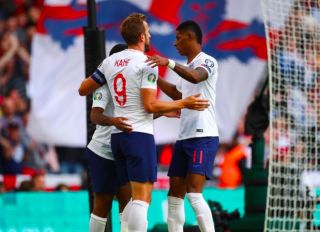 Rashford has been criticised in recent weeks for his wastefulness in the final third, whereas Sterling has been in electric form under Pep Guardiola at Manchester City.

Sterling, 24, was again on the scoresheet as England thrashed Bulgaria 4-0 in the Euro 2020 qualifiers at Wembley, a game in which Rashford played a full 90 minutes on the left-wing.

Under Guardiola, Sterling has developed into one of the best players in the Premier League, and is much more assured in front of goal than he was when he first arrived at the Etihad.

He scored 17 goals in the Premier League last season operating from the left, and has already scored five this time out.

“We said before the game he’s [Sterling] affecting games over the last couple of years.

“We spoke about Rashford, Rashford, sometimes the best example for any player is one of their team-mates.

“Rashford can learn so much from Sterling, whether training with him or watching him at close quarters.

“That’s a great lesson and hopefully he is picking up them tips that we did see in the second half.”

In fairness to Rashford, he is not blessed to be playing with the same quality of creative players that Sterling has been able to develop his game with at Man City, with chances created for the former Liverpool man in each game.

But there is no doubt Rashford needs to improve on his final product in the final third, and was poor when starting up front for the Reds in the draw against Southampton last weekend.

Rashford’s second-half performance vastly improved against Bulgaria, and he will be hoping to maintain his place in Gareth Southgate’s starting eleven against Kosovo on Tuesday night.

Great team performance. Thanks for the support at Wembley & see you next week 🦁🦁🦁 pic.twitter.com/WJ9gPXtN10