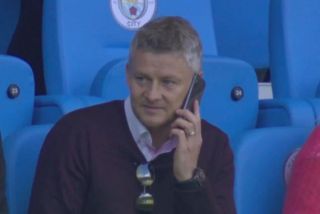 Ole Gunnar Solskjaer was in attendance for the first ever women’s Manchester Derby at the Etihad Stadium on Saturday.

The United boss showed support for Casey Stoney’s Reds, in their first season in the Women’s Super League after their formation in May 2018.

The game was played in front of a 31,000 crowd, smashing the previous record attendance for a WSL game by over 25,000.

Unfortunately, United lost on this occasion, thanks to Caroline Weir’s stunning effort early in the second-half.

The Reds did have the chance to score an equaliser late on as Jackie Groenen struck the inside of the post.

Solskjaer will hope the men’s team will have different fortunes when the Reds visit the Etihad on December 7.

See Ole in support below:

Ole Gunnar Solskjaer showed his support for Manchester United Women as he was spotted in the stands at the Etihad Stadium on the opening day of the new WSL season.#MUFC pic.twitter.com/3mp4oe5VML

Ole Gunnar Solskjaer was among the attendance at the Etihad.#muwomen pic.twitter.com/Jq0x9ZV5zK