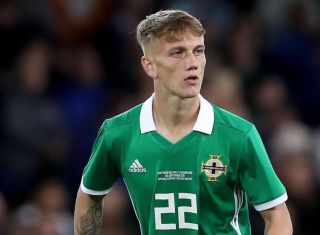 Manchester United youngster Ethan Galbrait made his senior Northern Ireland debut on Thursday night and manager Michael O’Neill was full of praise for the 18-year-old after the match.

“Ethan we’ve known since he was a baby,” O’Neill said, as per the Manchester Evening News. “Since the age of 13 he’s been in the system and it’s lovely to give a kid that opportunity.

“He’s come into training and he’s a lovely player, so easy on the eye.

“Hopefully that will give him the motivation and focus to kick on with his career.”

It’s obvious from O’Neill’s compliments that he rates Galbrait and believes the midfielder has potential.

Making his international debut, Galbrait has reached a remarkable milestone for such a young player, and he will be delighted to have marked the occasion with a 1-0 win over Luxembourg.

“I’m lost for words,” Galbraith told BBC Northern Ireland, as per ManUtd.com. “It was absolutely unreal, especially in front of a big crowd and at Windsor Park. Even walking out in the stadium was incredible.

“Warming up on the side, I felt like everyone was just watching me and I was getting a bit nervous and then, when Michael gave me the call, the nerves went away and the adrenaline starting kicking in, so it was good.

“I enjoyed it. I tried to get on the ball, but the ball wouldn’t fall for me. Eventually, when it did fall for me, I played a ball through to Shane [Ferguson] and I was feeling quite confident.

“I thought it would have taken me a bit longer [to settle] but felt I started out alright.

“The season is shaping up very well for me. I’ve been getting a lot of game time with United and to play tonight was unreal.”

He will take a lot from his first cap during the week, experience wise it should do his time in the United academy the world of good.

It’s also a big step towards Galbraith knocking on first team manager Ole Gunnar Solskjaer’s door. If a player in the youth team is getting senior international minutes, he’s already playing against the big boys, so the Norwegian will have to consider him at some stage.

Not many players make senior international debuts before appearing for their club’s first team.