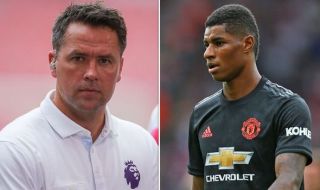 Marcus Rashford has responded to Michael Owen’s claim that he is not a natural goalscorer.

Speaking ahead of England’s game against Bulgaria on Saturday night, the footballer turned TV pundit suggested Rashford lacks the killer instinct required at the top level.

Rashford addressed the press at St. George’s Park on Friday and was asked about what he thought of Owen’s comments, to which he said (as quoted by the Manchester Evening News):

“He [Owen] can only go on what he sees. Whereas the people around me [know]. Especially when I was younger, the reason why you start playing is because you see things that you like and for me, it was goals and watching exciting people doing exciting things with the ball.

“So, the important thing is what I know. I know what I want, what I want to become and what I will become if I keep my mind on it.”

Currently away on international duty with Gareth Southgate’s Three Lions, Rashford is training alongside Tottenham striker Harry Kane. He says it inspires him to improve.

“If you watch training, then you’d see how it all works,” Rashford continued. “I could use Harry Kane as an example. He’s one of the best finishers that I’ve played with and whenever we do finishing, in my head, it’s about being as close to him as possible.

If you missed it, Owen said the following, as quoted by the MEN:

“I don’t think he is obsessed with goals. He is a better all-round player than me, he has a great touch and all round skill that I never had, but he hasn’t got the killer instinct that I had.

“I was just obsessed…but I don’t think scoring goals is what he goes to bed craving.

Rashford has a lot more responsibility this season with United short in attack.

It all comes down top how many goals he and Anthony Martial add to their tallies this season.

The pair should be scoring close to 20 each this term, and that will go a long way towards shaping Solskjaer’s side for the future. If they fail it will be a missed opportunity and one that could force the manager into the transfer market for a top goalscorer next summer.