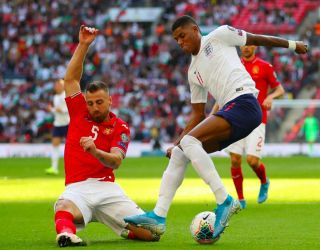 Marcus Rashford was bright as England cruised to a 4-0 victory over Bulgaria at Wembley in the Euro 2020 qualifiers.

The 21-year-old has come under heavy criticism among sections of United supporters after his poor performances and wastefulness in front of goal early on this season.

Ole Gunnar Solskjaer selected the youngster in the centre forward position away to Southampton last weekend, due to an injury Anthony Martial sustained in the previous defeat to Crystal Palace.

But Rashford looked far more dangerous back in the left-wing role for England under Gareth Southgate, particularly in the second-half, supporting Harry Kane in attack.

He looks far more of a threat when his back isn’t to goal as it is when he has to hold the ball up and bring others into attack in the central role.

Rashford is best utilised getting in behind opposition defences, and gets the most space when operating on the wing.

It’s long been thought that Rashford’s best position was in a central role, but lots of United fans now think he is better suited to play as a winger.

However, if Martial returns as expected against Leicester in the central role, then it could be an interesting selection dilemma for Solskjaer with August player of the month Daniel James looking United’s best player from the left against Southampton.

Very bright second half, unlucky not to score or assist. 🥢🥢🥢 pic.twitter.com/a5rmudCyCh

Good performance from #England @MarcusRashford had a great game. He is so much more effective playing out wide. #ENGBUL

Always thought Rashford was a striker. He's a winger

After watching the England Bulgaria game, Rashford is definitely more comfortable as a winger. Should play 4-3-3 with a front three of James, Martial the only striker and Rashford at UTD

Rashford lowkey a better winger than a striker

Rashford May be a winger you know.

Marcus Rashford should play as a right winger at Man United. He could be better as a left winger but Dan James is quality on the left

Hope this match and our match against Southampton confirm to Solskjaer that Rashford must start our games as a winger. Miles better there than up front.