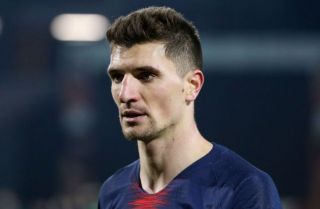 Manchester United fans appear to be relieved that their club didn’t sign Thomas Meunier this summer because of how quickly Aaron Wan-Bissaka has settled at Old Trafford.

The Belgian full-back recently told French outlet RTBF just how close he was to leaving Paris Saint-Germain, when United were closely linked with a move before we ended up securing a deal with Crystal Palace for Wan-Bissaka.

Wan-Bissaka has yet to earn his first cap for England but he’s started life at United quicker than most would have imagined.

The 21-year-old has registered by far the most tackles (26) in the Premier League, as per BT Sport, and it finally looks like United have a right-back for the future.

It’s been a long time coming, but who knows what would have happened if United lost out on AWB and ended up with Meuiner instead?

Meuiner has played just 80 minutes for PSG so far this season, whereas AWB is easily up there with Ole Gunnar Solskjaer’s top performers.

It definitely looks like United got themselves a better player with a much higher ceiling.

Here is what the fans have said about their new defender in response to Meuiner’s comments:

Thank god we got this monster instead pic.twitter.com/DhXojVS6W1

If AWB keeps playing like this, he’s gonna replace Gary Neville in the all time Utd best 11

AWB triple the player this guy is

Dont care about him
Because we have wan bissaka

Dont care about him
Because we have wan bissaka