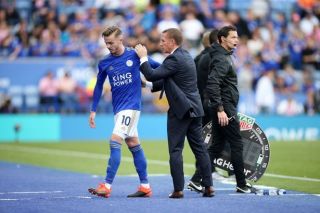 Manchester United are reportedly monitoring Leicester City star James Maddison, but the playmaker is said to be “happy” at the King Power Stadium.

The Express have ran an exclusive interview with ex-Foxes defender Steve Walsh, who does not think Maddison is looking for a big move up the English football ladder yet.

“He’s happy where he is, that’s number one,” the former centre-back said.

“And I think he’s grateful that Leicester gave him a chance in the Premier League because he was playing for Norwich and, OK, doing very well, but it’s a big step up.

“We spent some good money (£20m) on him and are now developing him into a top-class player. I think he understands the grass isn’t always greener on the other side and I’m sure he’s a loyal kind of guy, he seems it.

“He’s down to earth and a great lad. He’s got everything to make him one of the top players in the world if he continues with the progress he is making.”

With two assists in the opening four games of the Premier League this season, Maddison earned his first call-up to Gareth Southgate’s senior squad last week and could make his international debut in the upcoming Euro 2020 qualifiers against Bulgaria and Kosovo.

His form over the past year has warranted interest from United, and manager Ole Gunnar Solskjaer could certainly do with a player of his ilk rather than starting Jesse Lingard most weeks.

No offence to Lingard, but to go eight months without a single goal contribution is abysmal so questions are bound to be asked…

Maddison could join ex-teammate Harry Maguire at Old Trafford in a transfer does happen. The Mirror reported last month that United are planning to target the former Norwich starlet in the coming transfer windows.

While United’s results have been poor (while Leicester get off to a blistering start), Maguire has looked solid at the back. It may take time for everything to come together but Solskjaer is already having to deal with injuries to his squad, having both preferred full-backs ruled out at the moment.