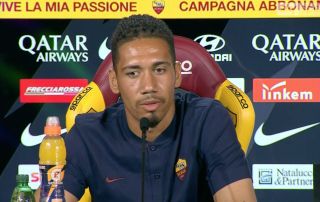 Chris Smalling is already talking about a long-term future in Italy granted this season-long loan from Manchester United to Roma is successful.

The centre-back has joined the Serie A club until next summer after falling down the pecking order at Old Trafford following the £80m acquisition of Harry Maguire.

He also fell out of favour in the England national team with Gareth Southgate not one for calling up Smalling whenever international duty comes around. The belief is that the former Fulham defender isn’t very good on the ball and doesn’t compare to those he’s up against in the Three Lions set up.

Smalling was officially presented as a Roma player on Friday morning and suggested he could stay beyond his loan deal.

“This is an opportunity that came to me that I was very interested in, and I was very eager to come,” he said, as quoted by Sky Sports.

“It happened very quickly and now I focus on the next game, getting up to speed with training in terms of the manager’s methods and then hopefully have a very good season.

“To be able to have the chance at a big club, and then if it prolongs and the club is happy then I can definitely see a longer-term future in Italy.”

During Smalling’s time at Old Trafford, the centre-back made 323 appearances and won the Premier League twice, as well as the FA Cup, League Cup and the Europa League.

He is the latest of a number of England internationals to move abroad, which he reveals has always been a desire of his.

“I’ve always had a desire deep down to experience this and have an opportunity to come to a big club who has got big aspirations,” Smalling added. “There is a lot of responsibility on the defence as a whole [in Italy] and the centre-backs too, but that is something I enjoy.

“I like to push up high, play high up the pitch, and the manager wants us to be high. I am a defender that likes to defend on the front foot so I think this is the perfect type of football for me and hopefully it allows me to show my real qualities.

“I don’t want to live my life with regrets and to be able to experience this and build on this journey, it’s something I’m really looking forward to.”

Former United team-mate Romelu Lukaku also left United for Italy this summer, but the Inter Milan striker has already been subjected to racist chants from the terraces.

An Inter fan group released an extraordinary letter to Lukaku afterwards, insisting the chants were not racist.

Speaking about racism, Smalling said: “I think racism is unacceptable and should not be stood for. It is not an issue just in Italy, it is around the world.

“There needs to be a change, there will be generational changes and younger people will have a different perspective.

“But it does happen, not just in Italy but around the world, and it is very sad and unacceptable that it still happens in these modern times.”