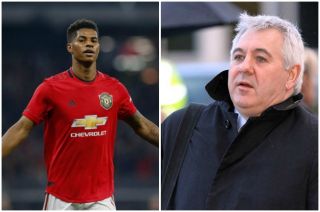 We all know about Wayne Rooney’s history of tantrums and transfer requests at Old Trafford, so it’s a tad worrying to hear that the man behind it wants to add Marcus Rashford to his client list.

According to the Daily Mail, infamous football agent Paul Stretford is in the process of presenting a proposal to represent Manchester United striker Marcus Rashford, who is apparently being advised at the minute by close family members.

Rooney may be a legend at United but his behaviour at times was questionable to say the least. In 2013 Sky Sports reported that Rooney had handed in a transfer request for a second time at the club…

Moreover, Rashford should ask himself if he wants to be represented by an agent who had agreed to out of court settlements with 16 players over secret payments he had been taking from a financial adviser… That, too, was reported by the Daily Mail.

Agents should look in their client’s best interests. Sure, Stretford got Rooney bigger and better deals at United and both gained financially, but he also contributed to tarnishing Rooney’s reputation with a lot of fans.

Rashford is still a player with potential and not one who is anywhere near as good as he needs to be to lead United’s attack. This season Ole Gunnar Solskjaer has granted him the opportunity to do that along with Anthony Martial. That’s a lot of responsibility.