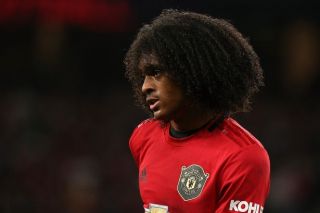 Manchester United wonderkid Tahith Chong has revealed a conversation with manager Ole Gunnar Solskjaer convinced him to decline two loan moves back to the Netherlands this season and stay at the club.

“Ole Gunnar Solskjaer says: ‘keep working hard, your chances will come’,” the youngster told Voetbal Primeur. “That’s nice to hear. There are a few players away from Manchester United and I’m climbing in now the pecking order.

“It’s always nice to come back to the Netherlands, but in the end I have to do what I find best for myself. That’s why I decided to stay.”

Chong isn’t starting games at the moment but he is still likely to get first team opportunities this season.

Those minutes should come in the Europa League and League Cup, as the former starts with a home clash against Astana on Thursday September 19th.

There’s no getting away from the fact the Europa League is a second-rate competition, but this season Solskjaer should look to use it as a way to give his hungry youngsters some valuable experience playing in Europe.

The boss should go all out to win the tournament, of course, but in the group stages we need to see the likes of Chong, Angel Gomes and Mason Greenwood get minutes on the pitch.

Anthony Martial and Marcus Rashford stand in the way of Chong earning a place in the starting line-up, and even at that Solskjaer would be more likely to shoehorn someone else into the role on the left-flank for big Premier League games.

Greenwood looks a lot closer to the starting eleven than the Dutch kid.