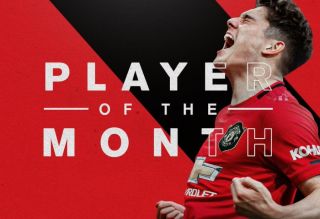 What a month it’s been for young Daniel James. From breaking into Premier League like a fish in water, becoming Manchester United’s top scorer in the process, to winning the club’s player of the month award for August. It really is the stuff of dreams.

The only thing lacking — and, without question, the most important — is the overall performance of the team and the results.

The 21-year-old settled into his new surroundings quickly when he came off the bench to score on his debut in a 4-0 win over Chelsea on August 11.

Manager Ole Gunnar Solskjaer then decided to start James in United’s next three outings and he added to his tally for the season with quality strikes against Crystal Palace and Southampton.

His lightening pace and work rate makes his a joy to watch but the goals he’s scored show his sheer quality in and around the box.

James has been deservedly rewarded for his brilliant start to life at Old Trafford by being named the club’s player of the month after picking up 61% of the final vote, as per United’s official website.

Fellow new signings Aaron Wan-Bissaka and Harry Maguire were also nominated for the award, but it was the former Swansea City winger who came out on top.