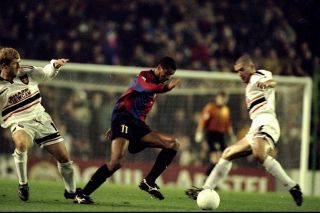 Rivaldo is a big fan of Liverpool forward Roberto Firmino, but believes he would have done just as well had he moved to Manchester United.

Firmino recently became the first player from Brazil to score 50 goals in the Premier League, a tally he’s reached after 141 appearances. The milestone came during Liverpool’s 3-0 win against Burnley last weekend.

Rivaldo was a better player in his day but similar as a playmaking attacker, and the 2002 World Cup winner thinks he’d have reached the 50-goal haul before Firmino had United signed him at the start of the Millennium!

“Roberto Firmino has become the first Brazilian player to reach 50 goals on Premier League and I must congratulate him for that achievement,” the Barcelona legend told Betfair.

“He is a player of great personality, with a particular taste for scoring goals and also very clever on his movements near the opposite goal.

“He didn’t play in the starting 11 at the last World Cup but looks like he will have a good chance of starring for his country in 2022 because he is a top forward.

“Perhaps if I had signed for Manchester United when I had the opportunity, I could have achieved something similar to what Firmino is doing at Liverpool.

“Of course, it would depend on the time spent there. But I did shape my style from a creative player, who only assisted others, into someone who could also score regularly.

“In five seasons with Barcelona I scored 130 goals, so why couldn’t I have scored 50 or so in England? I think it would have been possible after four or five seasons there.”

Rivaldo specifically talks about joining United and not just a Premier League club.

Having won the Ballon d’Or during his time with Barcelona, he’s definitely a player Sir Alex Ferguson would have wanted at United… and who knows how better he would have been under the Scot.

The Brazilian legend was linked with a move top Old Trafford after the Reds won the Treble in 1999 but was unwilling to leave Barça.

And with his excellent scoring record in Spain, there’s no reason to believe he wouldn’t have broke the record before Firmino.