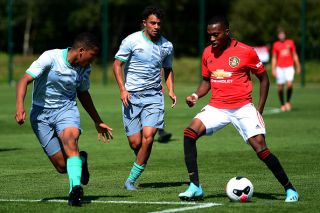 The 16-year-old Republic of Ireland youth international underwent tests at United’s Carrington training ground and clocked a staggering maximum speed of 22.9mph, according to the Daily Mail.

That’s more than 1.2mph ahead of second quickest Diogo Dalot.

Sotona currently plays for United’s U18s and only time will tell if he has what it takes to break into the first-team.

The report states that Sotona was Ireland’s U14 sprint champion at the age of 12, so he’s always been quick on his feet.

This will be music to Ole Gunnar Solskjaer’s ears as the Norwegian is trying to build his attack around young players blessed with pace.

While Sotona is currently a Republic of Ireland youth international, he is also eligible for England, which may be something the Irish need to sort before it’s too late.

The quickest in the first-team are Dalot, Marcus Rashford, Daniel James and Tahith Chong.