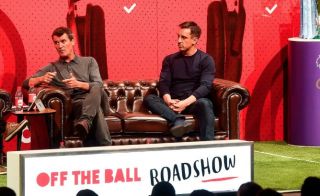 Roy Keane sat alongside Gary Neville at a Cadbury’s Off The Ball roadshow in Dublin’s Bord Gais Theatre and reignited his feud with former manager Sir Alex Ferguson.

The Corkman – known for his no-nonsense opinions — claims he will never forgive his mentor and once again he criticised the Scot for how he was portrayed in the aftermath of his Old Trafford exit in 2005.

Keane left and joined Celtic after his relationship with Ferguson worsened in their final years together in Manchester.

The legendary duo won 17 trophies together – including the Treble in 1999.

Keane took aim at the man who brought him to Old Trafford from Nottingham Forest last night by questioning Fergie’s man management.

Speaking to Off The Ball, Keane said: “I wouldn’t forgive Ferguson. The media spin, how I apparently upset everyone, it was all nonsense.

“I don’t care if it’s Alex Ferguson or the Pope, you’re going to defend yourself.

“People talk about Ferguson’s man-management. Nonsense. People said he always had the best interests of Manchester United at heart. Darren Ferguson (his son) won a medal. He was very lucky.”

We’re unlikely to see the day that the pair get over their differences, which is undoubtedly a shame, but there are two sides to every argument.

I enjoy listening to Keane more than most people in football. And, as a player in the Premier League, nobody matched his tenacity and engine.