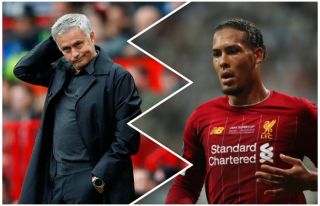 Jose Mourinho urged Manchester United to not rival Liverpool in the race to sign Netherlands defender Virgil van Dijk, according to reports.

Van Dijk has since established himself as one of the world’s best central defenders following his £75m move from Southampton to Liverpool in January 2018.

There was a lot of talk about the fee at the time – like when Rio Ferdinand joined the Red Devils from Leeds in 2002 for £30m – but people now recognise that’s the going rate for a world-class centre-back.

According to The Independent, Van Dijk’s name was put forward as a potential signing before he eventually joined Liverpool but Mourinho ‘said no’ to the possibility of bringing the big Dutch international to Old Trafford.

The report goes on to claim Mourinho didn’t want another central defender at the time, yet the 56-year-old changed his mind just a few months later – when Ed Woodward failed to sign one, which angered the Portuguese coach.

United finally got a centre-back this summer though, with Harry Maguire arriving from Leicester City.

The England international has started well but the comparisons to Van Dijk are both unfair and premature.

And now, the problem at United no longer appears to be at the back but in midfield and up front. Solskjaer needs to be given more transfer windows to fix those issues.