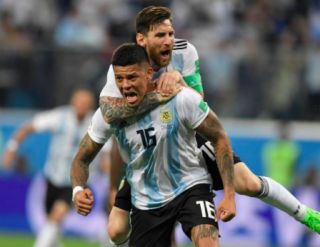 Marcos Rojo says he could try to leave Manchester United in order to get back into the Argentina national side.

The defender is yet to feature for the Reds under Ole Gunnar Solskjaer this season, after failing to secure a move away from Old Trafford this summer.

The 29-year-old is behind Victor Lindelof, Harry Maguire, Axel Tuanzebe and Phil Jones in the pecking order for central defenders for United, so it’s no surprise he would want a move in order to further his career.

Speaking with TyC Sports, as quoted by Mundoal biceleste , Rojo discussed his selection in the national team by boss Lionel Scaloni.

“Scaloni told me that he was happy because I played during pre-season, he saw me doing well and that’s why I was called up but I Have to play. I know that to be in the Argentina national team, you have to continue to play for your club and when you play, you have to do well.

“It costs to leave a club so big but I think of my career and of wanting to be in the Argentina national team. I’ll continue to fight until January and if I’m not picked, I will try to leave because the World Cup qualifiers are coming as well as the Copa America and I don’t want to watch that again from home.”

Rojo has made his ambitions clear that he wants to leave the club and a January exit seems the most likely scenario.

The defender is unlikely to play many games under Solskjaer, even with the League Cup game against Rochdale and the Europa League group stages coming up.

However, he could provide some needed full-back cover if the Reds are dealt with another injury in the position with Luke Shaw and Diogo Dalot both currently out.

But in truth, Rojo’s career at Old Trafford has been up for some time now and he shouldn’t be relied upon in defence.

The Daily Mail reported that he was fuming he did not complete a deadline day switch to Everton, but let’s hope the Reds can agree to offload him if he is surplus to requirements under Solskjaer.