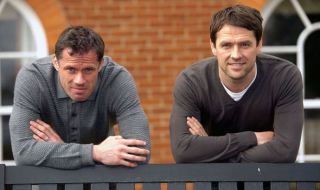 Jamie Carragher has come out supporting ex-teammate Michael Owen on the back of criticism received from Liverpool fans over the years.

The 39-year-old is in the process of releasing a new book — Reboot: My Life, My Time – which is out on September 5 and it has made plenty of headlines this week as excerpts have been published by various papers.

Now an ambassador at Liverpool, Owen still gets stick for some of the decisions he made… like joining Manchester United in 2009.

Carragher has attempted to reason with those angered by Owen’s transfer to the Red Devils by insisting that what the striker achieved with Liverpool shouldn’t be forgotten and he believes some fans have crossed the line with their criticism.

“There’s no doubt, in speaking to Michael, he’s been desperate to do this book to get a lot off his chest for a while,” he is quoted by The Mirror. “That is mainly down to his decision to leave Liverpool and, years later, join Manchester United.

“I tried to stop him doing both!

“I must say I think some of the stick from Liverpool fans is bang out of order considering what he did for the club and the reaction other players get who did nothing for Liverpool. It hurts Michael and his family, but hopefully this book will let people know the real story and why he came to these decisions.”

Joining a rival is obviously going to annoy supporters – but maybe some of the criticism directed at Owen has been over the top.

I can’t say I’ve seen any instances of shocking abuse, though that doesn’t mean it never happened… but part of me believes such hate is part and parcel in football, and what exactly did Owen expect when he joined United?

It worked out in his favour. The former Real Madrid forward came to Old Trafford, scored a memorable winner in a Manchester derby, and lifted the Premier League.

How many former Liverpool players have a PL winners’ medal to their name?