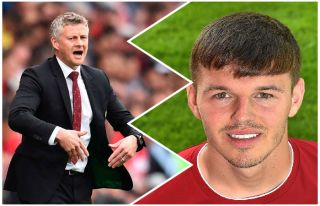 It has been claimed that Bobby Duncan, formerly of Liverpool, rejected the chance to join Manchester United this summer before signing for Fiorentina.

The teenager, a cousin of Steven Gerrard, joined the Italian club in a £1.8m move last week after his agent claimed the 18-year-old was bullied by Liverpool.

Yet Italian agent Vincenzo Morabito, who worked on the deal to take Duncan to Fiorentina, says he turned the Red Devils down because he did not want to betray his former club.

Speaking to the Daily Mail, Morabito said: “It all started in April. Saif Rubie [Duncan’s agent] contacted me and we set to work to find new accommodation for Bobby.

“The boy did not want to betray Liverpool and said no to Manchester United who insisted so much with him.

“Simone Inzaghi [Lazio manager] would have made him grow a lot and I hope he is like that with [Fiorentina boss] Vincenzo Montello.”

Liverpool were accused of damaging Duncan’s mental health during what became a nasty saga for all parties involved, as reported by The Telegraph.

Duncan only spent a year at Liverpool following a move from Manchester City and did very well for the U18s, scoring over 30 goals in his debut season.

All seemed rosy when he got minutes on Liverpool’s pre-season tour but then, it appeared Jurgen Klopp didn’t feel the youngster was ready for the first-team yet, which seems fair for a player who’s just turned 18.

He would have been competing with Mohamed Salah and Roberto Firmino too!

It will be interested to see if he gets any game time in Italy this season.

Over the line! Really happy to sign for @ACFFiorentina, and even more excited to get started! Can’t wait to play in front of all the fans and experience the Italian culture. Thanks to all the fans for the messages!! 💜 #ForzaViola pic.twitter.com/4EeiHUCBxa

But what happened behind the scenes is different, and it’s clear the player’s agent wasn’t too happy with Liverpool’s treatment towards his client.

We were totally unaware of United’s interest in Duncan…