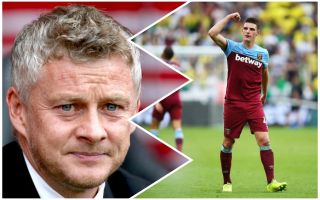 West Ham midfielder Declan Rice has addressed transfer links with Manchester United, admitting he believes he has the ability to play for the Red Devils.

That’s not saying much when you look at the current midfield – but we don’t think Rice is being a smart arse.

The England international has been targeted by United but a move didn’t happen over the summer, and it was only suggested by the media before the transfer window opened.

Speculation grew amid Rice’s contract talks with the Hammers, but he has since put pen to paper on a new deal with Manuel Pellegrini’s side keeping him in East London till 2024, as per The Independent.

After only breaking through for West Ham last season, perhaps the recent transfer window was not the right time to move and Rice is better off building on his experience in the top flight before completing a big move to one of the top six.

There were reports that Manchester City were interested too, not long ago.

“Don’t get me wrong, I think I’ve got the ability to play for a club like that. But it’s all about the timing and I don’t think the timing is right for me at all. I’ve still got so much to learn,” he told FourFourTwo, when asked about links with United.

The quotes have been lifted by the Manchester Evening News without a link, so we can only imagine the interview is available in the print edition of the FourFourTwo magazine.

“I’m loving it at West Ham, the connection between me and the supporters is special. I’ve become one of the fans’ favourites and the manager likes me.

“It’s the best place for me to play my football.”

A lot of people are talking about United and James Maddison of Leicester City, who would be another great buy, but I’d argue Rice is equally needed.

Unless Scott McTominay and Paul Pogba improve as a pivot, Ole Gunnar Solskjaer will need to sign a new central midfielder, and who knows what the Frenchman has planned next summer transfer wise?

Rice is definitely a player the Norwegian should be keeping a close eye on this season.