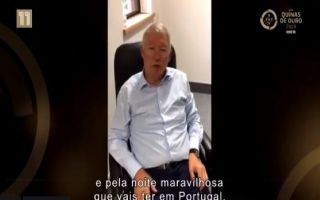 Cristiano Ronaldo truly blossomed from a youngster into a world-class footballer at Manchester United.

With the help of Sir Alex Ferguson, Ronaldo developed his game and is now recognised as one of the very best to ever play the beautiful game.

There’s always been an incredible amount of respect shared between the pair, so Ferguson has delivered a video message of congratulations for the Juventus star. This was in reaction to Ronaldo winning an award as the best Portuguese player, which to be fair, has never been in doubt!

Although Ronaldo left United in 2009 fans continued to sing his name at Old Trafford for years after. The admiration held towards Ronnie stems deeper than Sir Alex as we’re all very proud to have witnessed his rise to the top.

Fergie also puts emphasis on Ronaldo growing to become a great human being as well, showing how important the Scot values good people as well as unbelievable footballers.

Sir Alex Ferguson sending a message to Cristiano Ronaldo as he was awarded the best Portuguese player. pic.twitter.com/ndgnWBoyvb