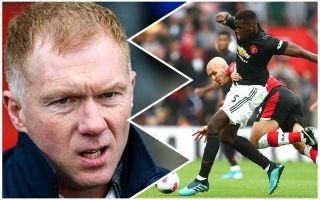 The last outing for Manchester United served up another disappointing result.

Ole Gunnar Solskjaer’s side have picked up just five points from their opening 4-games.

Saturday’s 1-1 draw at Southampton comes as the latest blow for the Red Devils, and the fact that the Saints were reduced to 10 men in the 73rd minute makes the outcome even worse.

We should be putting away teams like that but after drawing with a decent side like Wolves, we suffered a home defeat to Crystal Palace! It already feels like us fans are in for another long season.

Paul Scholes gave an interesting take on those he feels were responsible for the draw at St. Mary’s last weekend. It’s not as if the former United midfielder ever holds back!

“I am disappointed,” Scholesy told Premier League TV, as quoted by the Metro. “But it wasn’t the young players I was disappointed with, it was more the experienced players.

United take on Leicester City after the international break (September 14) at Old Trafford. We are already out of the title race – not that we were ever going to be involved in it this time round – and Scholes thinks we’ll be saying that for the next two years at least.

“I think you almost have to write United off for the next two years, this season,” he added. “Until Ole Gunnar Solskjaer has cleared everything he wants out, has four or five transfer windows, United are going to be behind Manchester United, Liverpool, Chelsea and Tottenham.

The new signings have come in and done very well with all three up for the club’s player of the month (August) award. They’re all relatively young but the more experienced players aren’t doing as well, as Scholes correctly points out.

Someone needs to stand up and take responsibility for that and it should be Pogba, if he’s as much of a leader as some in France would suggest…