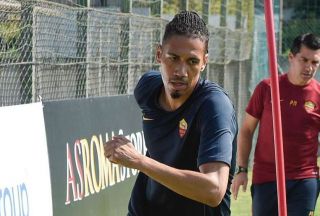 Chris Smalling is in the process of trying to settle down in the Italian capital of Rome.

The England international, signed by Sir Alex Ferguson from Fulham in 2010, renewed his contract at Manchester United last December but manager Ole Gunnar Solskjaer decided he has enough centre-backs fighting for places and it would only fair to move at least one of them on.

There was talk at the time that Marcos Rojo was on his way but a move for the Argentine never materialised. Smalling, on the other hand, joined Roma on a season-long loan and has already started training with the Serie A outfit.

According to Football Italia — before a deal was struck — Roma manager Paulo Fonseca identified Smalling as a pacey centre-back he had ‘long requested’ which makes you wonder why on earth they enquired about Liverpool’s Dejan Lovren!

Smalling is one of four United players that left Old Trafford for Serie A this summer. He has uploaded a photo to Instagram of his first training session with Roma, as seen below:

Excited to finally get stuck in @officialasroma ⚽️

We wish Smalling the very best in Serie A.