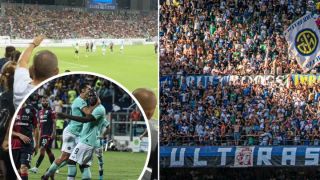 The fact that Romelu Lukaku’s own club’s fans defended the abhorrent racist abuse he was targeted with tells us just how deep-rooted the problem is.

Making his second Serie A appearance away to Cagliari, Lukaku was subject to monkey chants before taking the penalty to double Inter’s lead.

Lukaku’s reaction was simply to slot the penalty home and stare down the Cagliari supporters, not that he should have been judged for simply walking off the field in the face of such apparent racism.

Inexplicably, a section of Inter ‘ultras’ then decided it was wise to write an open letter to the Belgian, explaining why these racist incidents are actually not real racist, just a form of ‘intimidation’.

But, universally, there is an understanding that monkey chanting is a way of racially taunting someone with black skin.

It’s almost as if these self-proclaimed ‘fans’ are choosing racism over their own football club.

What Inter fans were telling Lukaku in reality, was that the racism is so entrenched that there will be no efforts made to defeat it, rather victims should merely learn to accept it or just jog on.

Racism is customary in Italian football culture, and we have seen similar incidents in recent years where Moise Kean and Sully Muntari have both been targeted with similar racist chanting.

But the fact that no severe punishments have been made, particularly on fans of Cagliari, just tells us those in charge don’t see it as the crisis that racism in 2019 really is.

Fans guilty should be banned for life, clubs should suffer point deductions, stadiums should be closed for matches. Only then is a strong message sent out that no human should have to deal with being castigated for the colour of their skin.

Of course, Italian football is not the only place racism lingers, the issue within football is a reflection on society as a whole and systemic of the underlying attitudes that still exist today.

Some of our own players have also been subject to racism in recent weeks; Paul Pogba and Marcus Rashford have both been targeted, on these occasions by keyboard warriors protected behind their twitter accounts.

Twitter has released a statement vowing to punish the minority of people making inexcusable racist remarks, but we all know that a social media platform is only responsible to the extent of banning users.

Racism is still very much rife and the bigots will only continue to exercise their racist messages when the form of punishment is simply admonition.

This is a statement released by @Inter_en ultras the #CurvaNord about the racism @RomeluLukaku9 was the victim of.
It begins with the words “we’re really sorry you thought what happened in Cagliari was racist.”
Anyone still wonder why I’m proud to never have set foot there?
🤦‍♂️🤦‍♂️ pic.twitter.com/r5huZfoEIL