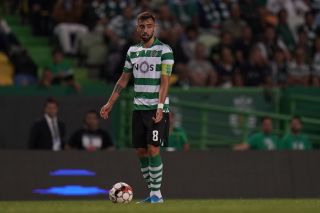 Bruno Fernandes will reportedly get a new contract at Sporting Lisbon just to get rid of a problematic clause in his current deal.

Portuguese publication Record (cited by Sport Witness) claim the Portuguese club would have to pay €5m to the player if they rejected any deal over €35m, but a new deal would remove that clause and see the player earn a higher salary.

An agreement is said to be in place raising Fernandes’ salary from €2m gross to €5m.

It works in Fernandes’ favour for the short-term at least! A new contract could make matters more complicated if he still wants to leave Sporting next summer – because the feeling is that he would have left for United this summer had the Red Devils upped their interest and made a bid.

However, an ESPN report did claim that United dropped their pursuit of the Portugal international because they felt he loses possession too much.

Record says that the new deal doesn’t cancel plans to sell the player for €70m next summer, though that will surely change if he replicates or improves on his form from last term.

Real Madrid were set to sign Fernandes for £64m on transfer deadline day, as per the Daily Mail, but those reports proved to be false.

Fernandes has two goals and four assists in his first five games of the season, which isn’t bad for a player who struggles in possession…

He’d certainly be an improvement on Jesse Lingard in the no.10 role.