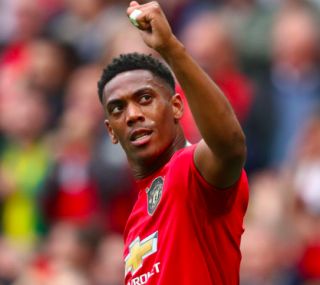 Anthony Martial should be fit for Manchester United’s home game against Leicester City after the international break.

That’s according to the Mirror, who report that the Frenchman will be back for selection against Brendan Rodgers’ side.

Martial picked up a thigh injury in United’s defeat to Crystal Palace at Old Trafford, ruling him out of Saturday’s 1-1 draw away to Southampton.

Ole Gunnar Solskjaer missed the striker’s clinical nature in front of goal, as the Reds could not capitalise on the limited opportunities they created at St Mary’s.

The Reds look far more dangerous in attack when Martial is in attack, and he currently seems the best option in the central striker role with Marcus Rashford underperforming.

The 23-year-old made an encouraging start to the league campaign with goals against Chelsea and Wolves, but the Reds have faltered since.

He is absent from France’s squad for the upcoming European Championship qualifiers against Andorra and Albania.

The Reds take on Leicester at Old Trafford on September 14th, in what promises to be a tough game after the Foxes’ flying start to the Premier League season.

Martial should retain his central striker role, while Marcus Rashford may have to operate from the right to keep his place after new signing Daniel James impressed cutting in from the left-wing against Southampton.