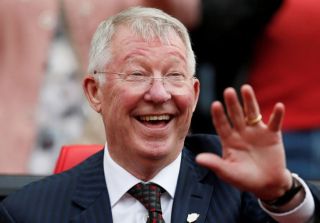 These meet-ups re scheduled for elite managers to share ideas and Ferguson didn’t hold back when it came to challenging the Arsenal boss.

Emery won the Europa League three times consecutive with La Liga outfit Sevilla between 2014 and 2016 – but Fergie, who was driven by winning the biggest of honours, made it clear to the Spaniard that it wasn’t enough.

The Scot prided himself on winning the Premier League, a title he achieved 13 times at Old Trafford, as well as the Champions League which he won twice.

Winning the Europa League is an achievement, of course, but Fergie would have worked to build on that whereas Emery seems satisfied with his success in a second-rate competition.

Speaking to Soccer AM, Emery said (quotes from The Sun): “One day we were in Nyon for the coaches meeting and I was defending a lot the Europa League, and he – Ferguson – asked me: ‘But really Unai, do you not prefer to win the Champions League?’

“Yes of course! He didn’t need to say it!

“But at the moment I can be happy and I can defend the Europa League because I think the Uefa people improve a lot this competition.

“But really, really the first is the Champions League – okay.”

Fergie won the Cup Winners’ Cup in 1983 with Aberdeen, before repeating the feat with the Red Devils in 1991. They acted as a stepping stone for what was to come at United — winning the Champions League in 1999 and then again in 2008.

The former Paris Saint-Germain manager added: “My first trophy was the Europa League with Sevilla, against Benfica in Turin. It was amazing.

“As a player it was very difficult to achieve some trophies, when I was starting as a coach I was thinking, ‘I want to progress, I want to improve, I want to move ahead’ and then when the first title arrived it was [breathes sigh of relief].

“And really after continuing winning some more and really I am here and my objective is to achieve some important things in the football first, and after is to achieve titles.”

If Emery has any plans to win the Champions League, it will take some work… Arsenal are currently stuck in the Europa League with us this season.

That said, a Europa League triumph would set current United boss Ole Gunnar Solskjaer up nicely but he’d be stupid to settle for that and think his job was done. The Reds should be in the Champions League every season and competing with the very best.

Winning the Champions League should be the aim for Manchester United rather than top four finishes, which also shows how far we’ve fallen.