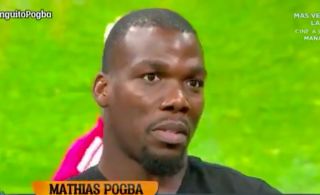 Paul Pogba’s brother Mathias has insisted the midfielder will focus on his season at Manchester United, after failing to complete a transfer to Real Madrid this summer.

Pogba’s future became one of the transfer sagas of the summer window after revealing he wanted to leave Old Trafford to seek ‘new challenges’ elsewhere.

But as reported by the Metro, Real were not willing to pay the £150m asking price set for the Frenchman, despite manager Zinedine Zidane being desperate to secure his signature.

Pogba’s brother is often, rather annoyingly outspoken on the star’s future, but now says he is focused on succeeding under Oe Gunnar Solskjaer this season.

“Paul knows that he cannot leave Manchester United so he’s going to focus on this season,” he told El Chiringuito TV as sourced by the Metro.

“It’s not easy right now, because he has a lot of responsibility in the team.

“A lot of big players have left. ‘The only great player is David De Gea, the goalkeeper, which means he’s going to have to put a lot of effort in every game.”

Pogba’s brother is right that the 26-year-old is of paramount importance to this United side.

Solskjaer has been left woefully short in midfield options after no midfielder was signed this summer to replace the departing Ander Herrera.

Andreas Pereira and Scott McTominay are not the quality of players that should be starting but are what Solskjaer has been left with for this campaign.

It’s understandable Pogba will have frustrations at the club looking around at the ability levels of his teammates, but he has to start putting in consistent performances and start creating more opportunities for his teammates.

The Reds are lacking a creative spark in midfield, and Pogba should be given the chance to play further forward instead of Jesse Lingard, with United scoring just three times in the last three Premier League games.